When it comes to cross-border trading, access to trade finance is a crucial component for any entrepreneur if they want to succeed. Exporters expect to be paid upon shipment, while importers require cash upfront when goods are received, creating a time gap that’s threatened by the risk of non-payment.

Historically, traditional banks stepped in to cover this risk by offering credit through trade finance. In fact, today it’s estimated that 80% of global trade is covered by some form of credit. However, as SMEs continue to account for the majority of businesses worldwide, the number of incumbent banks offering to give them trade finance is fast-decreasing, resulting in what’s known as the SME Trade Gap.

Estimated at a staggeringly high US$1.5 trillion globally, the trade finance gap is growing amid ongoing economic uncertainty caused by the COVID-19 pandemic. SMEs are the hardest hit by the challenges of obtaining trade finance, with the World Economic Forum (WEF) estimating this gap could reach US$2.5 trillion by 2025.

According to a recent report, 45% of trade finance applications by SMEs are rejected by banks, compared to 38% for medium to large-sized firms and 17% of multinational corporations. However, a banking survey showed that only 20% of rejected SME applications were actually ‘unbankable’.

Anti-money laundering (AML) and know-your-customer (KYC) compliance regulations are the biggest obstacles for smaller businesses when receiving approval for trade finance. While these regulations are crucial to counter the financing of terrorism or money laundering, incumbent banks end up inadvertently cutting off legitimate companies from the financial support they need to grow. 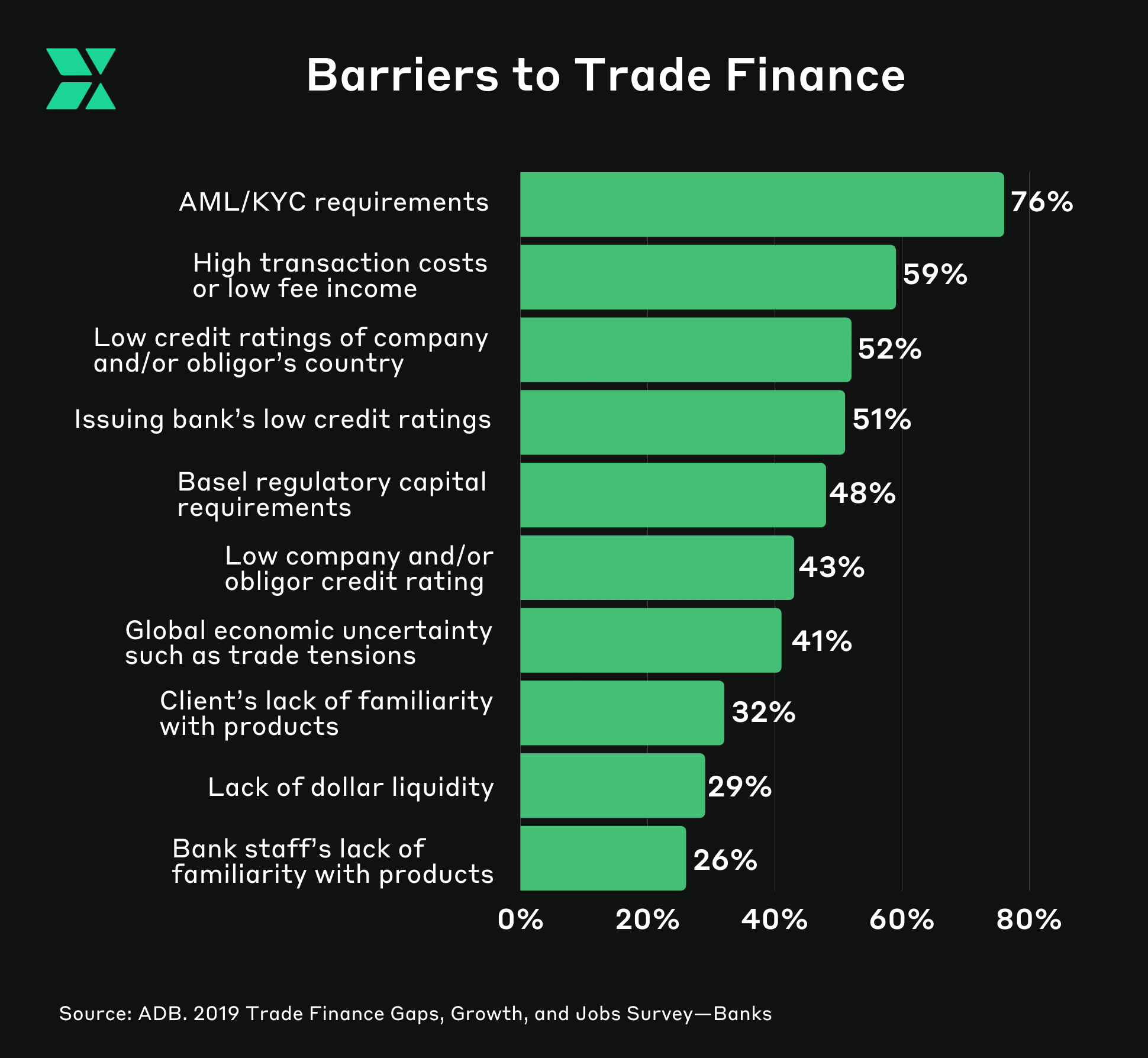 Pierre Garnier, Head of Trade Finance at Currenxie, says: “The ongoing pandemic has greatly affected businesses worldwide. Lockdowns and restrictions have caused traditional brick-and-mortar retailers to suffer the most, and online sales to boom. In the APAC region, the COVID-19 crisis is allowing eSellers to expand into other sectors previously dominated by physical stores. Therefore, the need for SMEs to have access to trade finance has never been greater, however, banks are rejecting more applications than ever before due to cost constraints caused by economic uncertainty.”

A recent study determined that SMEs account for 90% of businesses worldwide, and more than 50% of employment. According to Filippo Buzzi, Head of Italian Desk and Blockchain Desk at FIDINAM, “SMEs in Asia are acting as an engine of growth for the global economy. However, they are faced with short-term bank lending, shallow capital markets, a shortage of long-term investors and a lack of financial data and credit expertise — meaning that they’re unable to access appropriate forms of finance and capital as most have no clear property rights and collateral assets.”

“Fortunately, there is a solution,” says Pierre. “It lies in relying less on incumbent banks and more on digitisation as it has the potential to bridge the gap by giving SMEs better access to trade financing, subsequently helping empower them to contribute to the pandemic-battered global economy. This can be done by leveraging the services primarily offered by fintech companies.”

Bridging the Gap Through Digitisation

Fintech companies have been revolutionising the payments industry since the 2008 financial crisis, and have recently ventured into the trade finance space through online lending platforms as digital trade finance becomes more sought after.

Fintechs are becoming a catalyst for expanding global trade by helping SMEs significantly reduce costs and bureaucracy,” says Pierre. “By offering alternate forms of financing globally in real-time, these platforms are known to approve applications in a matter of weeks as opposed to the traditional route that used to take months.”

In addition to fast reviews and approvals, applications can be done entirely online — there’s no need for physical meetings or office visits. “This further incentivises digitalisation due to the spread of COVID-19, where trade financing for SMEs doesn’t have to be affected by social distancing or lockdown measures,” adds Filippo.

The rise in fintech trade financing can predominantly be seen in the APAC region. The alternative finance market in the Asia-Pacific has more than doubled between 2015 and 2016 and grew a further 69% from 2017 to 2018, with China accounting for 99% of the overall APAC market volume. Other key markets in the region include Hong Kong, Indonesia, Malaysia, the Philippines, and India.

Trade finance is an umbrella term for businesses looking to finance the export or import of goods in both domestic and international markets. Filippo explains, “Trade finance may be used to protect against international trade’s unique inherent risks, such as currency fluctuations, political instability, issues of non-payment, or the creditworthiness of one of the parties involved.”

A Simple Guide to Updating Your Bank Account for Amazon Sellers

10 Alternative Financing Options For Your SME

Small and Medium Enterprises (SMEs) are primary catalysts for economic development, representing up to 90% of businesses and resp…